Mills were an important part of life in early communities. Grains were a staple in the pantry of every settler household. Nearly every community had a grist mill or flour mill, where farmers took their grain to be ground into flour, meal and cereals. Mills were situated on riverbanks or next to a brook or pond. Sites were selected for waterpower. Mills were so necessary to the public that they were permitted to be located on any person's land determined desirable by the miller. Water power at the mills was also used for other jobs and the water source was used for transporting heavy loads. Roads and towns were built around the mills and early villages were settled. Towns grew and prospered because of their water-powered mills and the mill became a gathering place in the community.

The Lower Mill in Honeoye Falls, New York was a grist mill built on the banks of Honeoye Creek by Hiram Finch in 1827. At first it was called the "Lower Mills" to distinguish it from its sister mill, the "upper" mill at the falls, originally built in 1791 by Zebulon Norton and later sold to Hiram Finch. It was later called "Monroe Roller Mills" when it was owned by H.E. Boardman. Many brands of flour were manufactured from spring and winter wheat. Some of the patented names were "Boardman's Best" and Monroe Roller". In its prime, the capacity of the mill was 200 barrels a day, and it was considered one of the finest flouring mills in western New York.

Milling at Monroe Roller Mills continued until the late 1800's. For a short time the building was used for storage before it was leased to Tomkinson, Kenyon & Tomkinson, who reopened the mill operations under steam power. In 1901, a fire destroyed the interior of the mill, but within six months it was rebuilt within its original limestone walls. Milling continued until the 1930's when the Depression forced its closing. It was then used by a creamery to store ageing cheese and then sold to the Village. 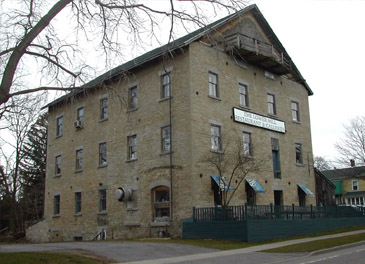 On May 17, 1973, the Lower Mill was listed on the National Register of Historic Places (building #73001200) which has identified more than 72,000 sites that are significant in American history. In 1977, when it was sold to Mr. and Mrs. Basil Elmer, the Lower Mill was restored and used as shops and art galleries.